Tampere-Pirkkala (EFTP) airport is located 7 nautical miles southwest of Tampere city area. Measured by the number of passengers, EFTP is the fifth busiest airport in Finland. Daily commercial flights takes place from Tampere to Helsinki by Finnair and from Tampere to Arlanda by Scandinavian Airlines. Other operators, as AirBaltic and Ryanair, can also be spotted at the airport.

The airport has 2 terminals. Terminal 2 is used as a terminal for low-cost carriers. Tampere is also a base for the Finnish Air Force, which aircraft are parked south of runway 06/24.

Tampere-Pirkkala airport is usually operated by one or two controllers. Either Tower is covering all sectors, or Tower and Radar are working separately. During peak hours with local VFR-, military- and commercial flights, the remaining sectors (Ground and Arrival) may be used.

The airport has one runway (06/24). ILS (Instrument Landing System) is in use for runway 24. Normally arriving IFR aircraft will be cleared to follow STAR or direct IAF (end of T-bar) and cleared for RNP runway 06 or ILS-Z runway 24. The choice of runway and arrival/departure routes depends on wind direction and velocity, cloud base, visibility, runway condition, available approach types and traffic situation. The most optimal runway for departing and arriving traffic is runway 06. During night (2000-0500 UTC), the preferred runway for arrivals is 06 and preferred runway for departures is 24. 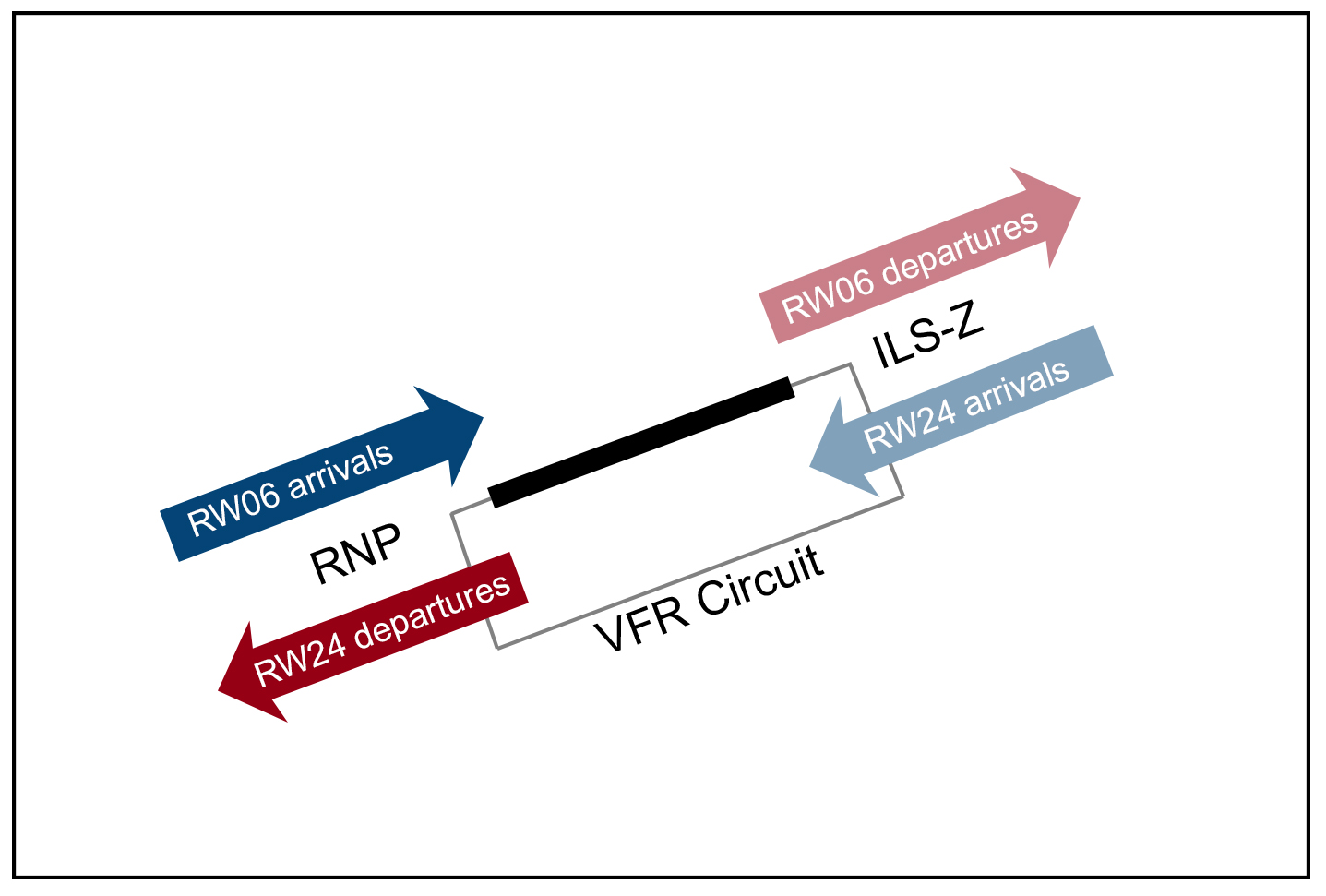 Tampere-Pirkkala airport has published IFR STAR routes for both runways. The ILS/RNP approach follows runway track 10-18 km from the runway and approach is performed with a 3 degree glide. IFR Departure routes (SID) are published to avoid noice impact on dense populated areas.

Visual approaches are also common at EFTP. During a visual approach, the arriving aircraft can turn final even at 4-5 km before threshold.

Tampere-Pirkkala airport is approved for Low Visibility Procedures. LVP for takeoff are in use when the Runway Visual Range (RVR) is less than 400 meters.

Low Visibility Procedures for Take-off are not allowed below RVR 300 meters.

LVP procedures will be taken in force gradually as follows:

LVP procedures has to be in force when the RVR value falls below 550 M.

The use of LVP procedures shall be informed to the pilots by ATIS or ATC:

Before each controlled IFR flight, the aircraft shall request a pre departure clearance (clearance to fly from A to B). When Radar is online, the Tower controller will get the approval for clearance from Radar (APP). The clearance includes mainly the destination, runway in use, departure route and next segment of flight plan route, altitude or flight level and the squawk code. If departure time is restricted, a TSAT or CTOT shall be given with the IFR clearance.

Coordination is required with Helsinki Control if a longer direct (DCT) clearance instead of TMA-exit point is preferred. The initial cleared altitude will be the final reuqested flight level, if not restricted by Helsinki Control (ACC).

Example of a pushback clearance:

To delay startup and pusback due to CTOT or other reason:

Taxiing on the apron is always subject to instructions by Pirkkala Ground or Tower.

To expedite traffic flow on the runway and minimize runway occupancy time, arrivals may be instructed to vacate using a specific taxiway. This might be useful especially during military operations.

The table below can be used as a general guideline for assigning parking positions at the airport:

Inbound IFR traffic will enter the TMA via ARBEV, EVLIT, GEMKU, NEBAB, NISVI, UVEMO or XORMU. Traffic will be cleared to FL100 by Helsinki Control, and cleared for RNAV STAR serving the runway in use. With prior coordination, a DCT to IAF (end of ILS/RNP T-bar) may be agreed with ACC. This is a good way to expedite arrivals. Military traffic not able to follow the STAR, will usually be cleared direct PIR VOR and expect vectors or visual/VOR approach serving the runway in use.

With the previous clearance, Non-RNAV traffic will follow the published Non-RNAV initial approach route (chart in AIP) from UVEMO to SOXOR in order to establish on the final approach track.

VFR inbounds and outbounds shall use the published Visual Reporting Points (VRP), due to noise abatement, presented in the VAC chart. The location of the VRPs has been choosen to avoid densly populated areas.

At Tampere-Pirkkala VFR traffic may fly the circuit in both directions (north and south of runway) without restrictions. In the north circuit the landing is performed on runway 06, and in the south circuit on runway 24.

Parachute jumping flights are not that common. These flights are mainly operated during summer evenings. The requested altitude depends on the aircraft size, functions, planned jump formation and the student experience. The climb shall normally be perfoemed south of the airport (EFTP TMA South sector).