You will get sufficient information of how to control departures and arrivals as a local ATS Unit (tower or approach). This document also includes information of reserved TRA/TSA areas and how to operate a fighter control position in Helsinki FIR.

The Finnish Air Force operates with the following aircraft types:

There are 3 types of callsigns used for military air traffic:

Military aircraft above the transition altitude are primarily using the standard pressure (QNE). Due to operational reasons the use of QNH and QFE may also be approved.

Every aircraft of the Finnish Airforce, except VN, are primarily flying with imperial units (feet).

Due to the nature of military traffic, some clearances are not able to comply with ATS rules and regulations. The exceptions of the rulses are listed in this document. These exceptions are only for military air traffic!

The ATC clearance is valid until the aircraft has reached the border of the reserved area.

A clearance to climb or descend to a level within a vertical range can be given. The vertical range between two aircraft or two formations has to be at least 1000 feet.

Military air traffic is allowed to fly inside active TSA areas or TRA areas over international waters. When controlling a local tower position, the planned reserved airspaces are found in the flightplan route or remark section (RMK/EFTSA M17 OK). The ATC clearance is valid until the aircraft is inside the reserved airspace and transferred to fighter controller. The radio transfer shall take place latest over the airspace border.

Military air traffic is also allowed to operate in active P- and R-areas when the mission requires. You will get this information via the flight plan remark section (RMK/EFR111A OK). If the commander intends to operate inside an active Danger Area, it is under his own responsibility to do so.

Prior to squawk code assignment, an military operated aircraft is identifiable by it's unique SSR Code 2600. When providing ATS service, each aircraft shall get it's own unique SSR code, even in formation flying. Example of a clearance for a 3 ship formation flight:

You may clear an aircraft or formation to take off, even if the preceding traffic has not passed the threshold of the opposite runway. In this case you have to give the sequence number. This procedure is only allowed when the visibility is more than 2000 meters.

Only give the takeoff or landing clearance when;
1. the runway is free or in use by another military aircraft
2. the runway lights are appropriate
3. the required navigation equipment is working

Operational Air Traffic can be cleared for takeoff when the runway visual range (RVR) is less than 550 meters, even if low visibility procedures for take-off (LVPTO) is not in use.

If the runways in use by a vehicle or another military aircraft, the approaching traffic can be cleared for low approach with a minimum altitude of 200 feet from the aerodrome elevation. Traffic information is necessary.

The ATS-Unit may terminate radar separation for special-VFR-flights when the visibility is more than 3000 meters during day time.

When the aircraft commander is requesting to change the responsibility for separation back to ATCO, the term "SPLIT" is used. The air traffic controller shall get information of the radar split intentions. When the required separation is achieved, ATCO will confirm it by the phrase "Radar Contact".

The required minimum obstacle clearance for military aircraft can be reduced to 150 meters in the CTR and TMA. This procedure is only allowed at controlled airports, where the ATC Surveillance Minimum Altitude Chart (ATC SMAC) is published. The 150 meters obstacle clearance is achieved by subtracting 500 feet from the SMAC value. The aircraft is required to stay inside controlled airspace.

In the initial call to Air Traffic Control, the formation leader shall inform the number of aircraft involved.

There is one Fighter Control position within Helsinki FIR on the IVAO network.

* In priority areas within Jyväskylä (EFJY) CTA, the lower limit may be 2000 FT MSL, irrespective of CTA activity.

** Depending on traffic, the lower limit may be at lowest between FL95 and FL120. The upper limit is FL270 and, if the air traffic cituation permits, reservations to higher flight levels may be granted. In addition, the SAIMA area includes areas EFTSAN30 and EFTSAN31 without priority.

This Fighter Control unit is mainly responsible for military aircraft within the priority TSAs of the Finnish Defense Force and EFTRAH21, EFTRAH27 and EFTRAV28 (marked as yellow in the map below). 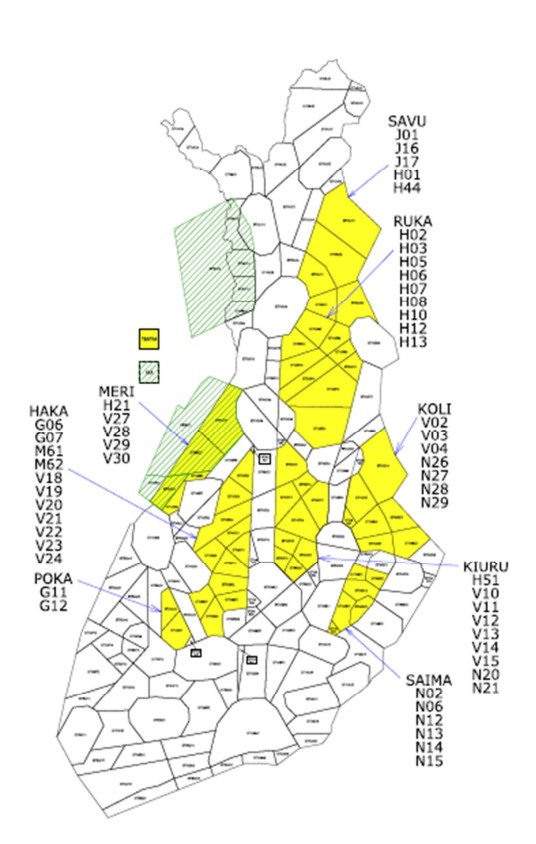 When the Fighter Control unit is online, the Area of Responsibility is automatically transferred to the military authorities. No prior airspace reservation is required. Coordination is required between Fighter Control and local ATS-Units / ACC-Units, to maintain separation to Civil Air Traffic and agree on entry-/exit points. Tactical points may be used, provided that coordinates are available to both ATS-Units and Fighter Control. Otherwise a inbound clearance to the actual TSA area may be agreed on.

You can find the joint brevity words for military missions here.

It is possible to agree with Helsinki FIR ATC-Units for additional airspace- or airport reservations.

When the mission is over, military aircraft shall be cleared to follow flight planned route, or other route coordinated with the ATS-Unit concerned. The traffic shall be transferred to the ATS-Unit not later than passing the reserved airspace border.

It is highly recommended to use the Fighter Control unit only when Helsinki ACC is online on the network.