The aerodrome has three runways, which are used in various configurations depending on wind and time of day. When runway 08 is used for departure, the direction of turn and SID identifier will depend on which runway is being used for landing. The current recommended runway configuration is shown in the box to the left.

The IFR clearance is issued by DEL. Traffic should be instructed to follow a standard departure (SID), based on the current runway in use. Coordination is required with Stockholm Control for traffic unable to follow SID. When the IFR clearance has been issued, DEL should instruct traffic of the next frequency to use for pushback/taxi.

Terminal 2 is used by OneWorld, SkyTeam and low-cost carriers such as easyJet and Vueling.

Terminals 3 and 4 are dedicated to domestic prop and jet traffic respectively.

The below table can be used as a general guideline for assigning parking positions at the airport.

Currently, traffic coming from the following airports should be considered Schengen traffic:

Arlanda Control Zone (CTR) has an upper limit of 1200FT/2000FT and is class C airspace. Service to traffic in the CTR should be provided in accordance with the airspace classification. Coordination is required between the two tower for traffic wishing to transit from East to West and vice versa.

The five approach sectors in combinations are responsible for the Stockholm TMA, which is class C airspace. Service should be provided in accordance with the airspace classification and according to the standard agreements, as outlined below. The minimum separation within Stockholm TMA is 3 NM / 1000 FT. Traffic flows in the TMA are shown on the below illustration. 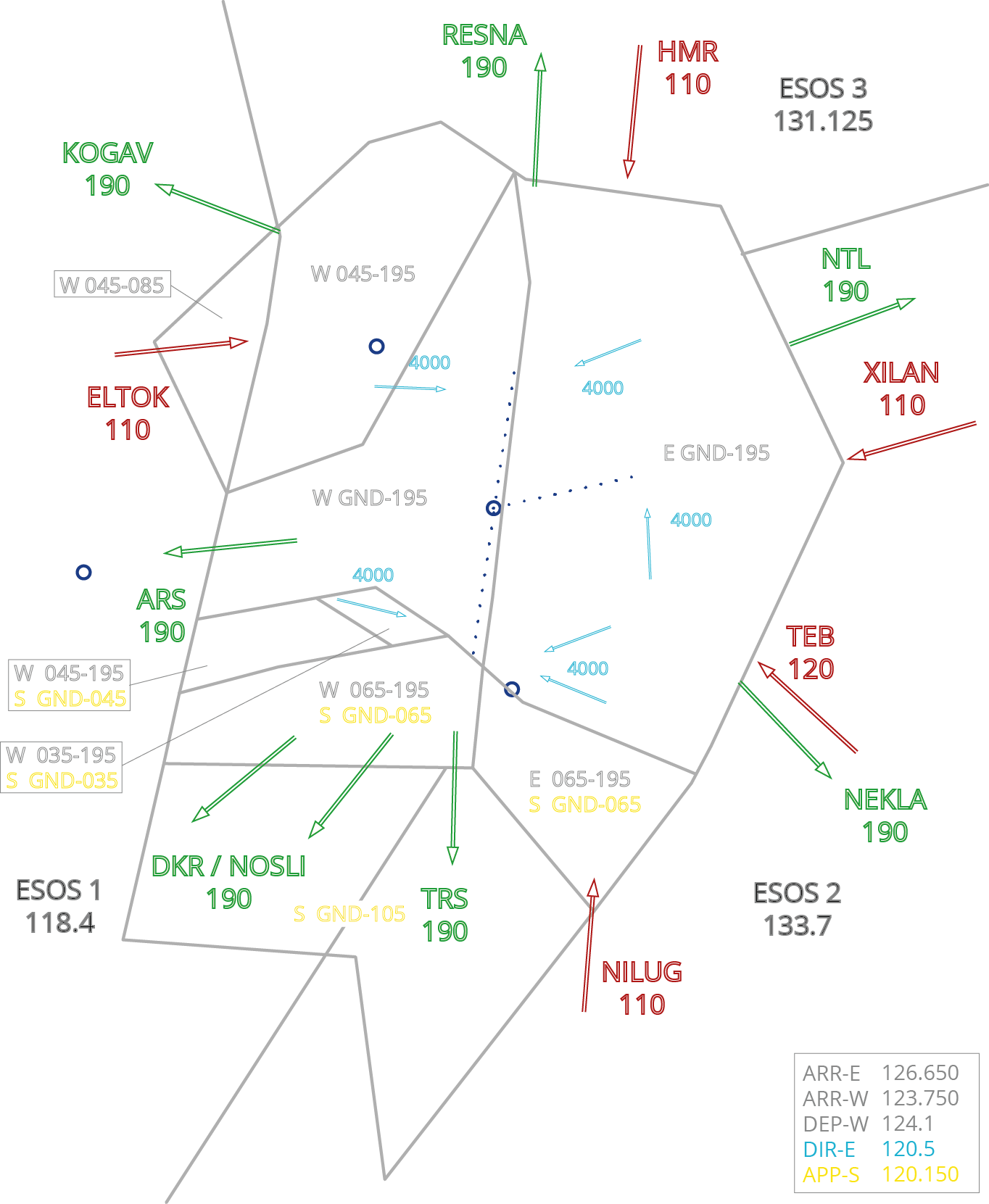 In addition to the below agreements, it should normally be coordinated with ACC to route arriving traffic direct to appropriate arrival fixes (LNA, NAK, TEB, ERK), depending on runway in use.

Vectoring traffic to final approach to runway in use. Normally, ILS approaches should be used. Visual approach are also available except to runways 01L/R for noise abatement; Arlanda Tower must be notified of traffic flying a visual approach.

Traffic will be transferred to final descending to 4000 FT. When vectoring for runway 01L / 01R, traffic will pass through APP-S airspace and must not be descended below 4000FT until north of the Bromma extended centreline, unless coordinated.

The minimum separation on final approach, within 10 NM from the runway, is 2,5 NM. However, it is recommended to use at least 3,5 NM, to give the preceding aircraft sufficient time to vacate the runway.

Transfer of control and transfer of communication to tower shall take place when an aircraft is 4 NM from touchdown.

When runway 01L/R is in use for landing at Arlanda, traffic to Bromma must remain south of the airfield at all times. Early descent is encouraged to remain clear of Arlanda inbounds.